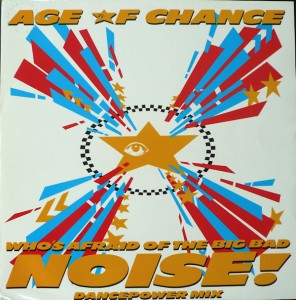 Age Of Chance were achingly cool for a short time in the late 80s.  Reviewed (accurately I thought) as sounding like a washing machine, and looking brilliant in retro cycling tops with the best cover art around courtesy of the fledgling Designer Republic, they were the business.  Then they signed for Virgin, and things should have gone horribly wrong.  In a way they did – poor sales and worse artwork weren’t ideal, but they carried on making great records almost until they split.

In some ways, this single, their major label debut is very dated, with its samples of what sound like (but probably aren’t) 1950s BBC announcers, but it has those washing machine guitars and the same self assured energy which made their earlier efforts so irresistable.   It’s not cool at all to like AOC’s major label stuff, but then, I’m not cool.