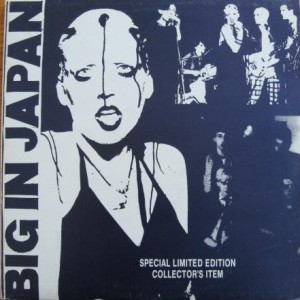 Big In Japan are more interesting for the line-up than the music.  Everyone in the band went on to be pretty successful in future ventures, although didn’t show much promise here.  It was like a supergroup in reverse.  So we have Holly Johnson (Frankie Goes To Hollywood), Bill Drummond (KLF), David Balfe (Teardrop Explodes), Ian Broudie (The Lightning Seeds), Budgie (Siouxsie and the Banshees) and others.

The music was conceptual art-punk with little emphasis on proficiency and is really only of interest as a curiosity.  It’s listenable though and worth a download if you’re into any of the bands these guys were later successful with.

My copy is a bootleg, bought in Virgin.  I do find it irritating that the music industry makes such a fuss about piracy, but are more than happy to stock dodgy product if they think they can make a few quid.  This had the tell-tale “Import Licence” which is usually a sign of a bootleg.  As a result the sound quality isn’t great – it sounds like it was ripped (poorly) from an original 7″.