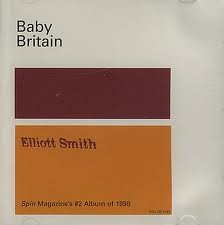 I really should be bored of this sort of music by now, but Elliott Smith still hits the spot.  Apart from the great songs, I just get the sense that he really means it which is what sets him apart, and actually, what has drawn me to much of the music I like.

I came to Elliott Smith very late – in fact the first album I bought was his last (From A Basement On A Hill), as I recall after reading about his suicide in 2003.  My nerdy completeist tendencies quickly kicked in and I soon had everything, at least everything that was widely available.  All that stuff is still available, but I do have this rare promo single, which is a remixed version of Baby Britain, the original being on the XO album.  It’s not radically different to the album version, but it’s a great song.  If you like it, you’re on safe territory with any of his albums, although I’ve never really taken to his posthumous collection of oddments, New Moon.  I’d go for Roman Candle or Figure 8.