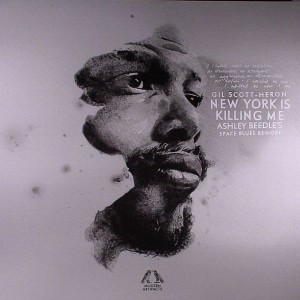 The quality of unofficial remixes of classic tracks seems to be going up and up.  Is the technology getting better?  Or their popularity causing DJs to up their game?  I have no idea but this is a particularly good example of the genre which, unusually, got an official release last year.  It now seems to be sold out everywhere, so it’s ripe for a posting here.

The original version, on Gil’s last album I’m New Here is essential listening.  This version adds a welcome layer of menace.  For my money it’s better than the Jamie XX remix of the same track on his LP We’re New Here. 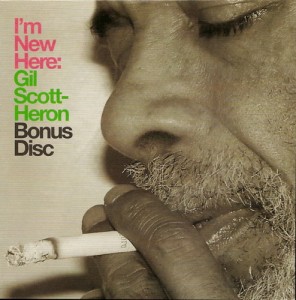 Gil Scott-Heron’s last album, I’m New Here was my favourite release of 2010.  This is a bonus CD which was given away with the first few copies sold by Rough Trade.  The tracks also appear on the vinyl edition.   The highlight is three studio demos, just Gil playing piano and singing (tracks 2, 3 and 5).  Tracklist and descriptions as follows:

I’m New Here was his first album in 15 years and represented quite a departure both musically and lyrically.  The mellow jazzy feel of his earlier material is replaced by a much more contemporary, edgy sound which works better with his voice than anything he’d done before.  Lyrically the politics he’s known for takes a back seat to the personal – this is an autobiographical album.

I was really upset when he died in 2011.  A lifetime of drug addiction had seen him spend much of his adult life in prison: the crazy and unjust result of treating drug addiction as a criminal, not a medical problem.   Dealt with medically, Gil might still be with us, and he wouldn’t have spent so much of his life languishing pointlessly in prison.  Still, he leaves behind an amazing body of work, some of which represents not just great music, but some of the most profound social and political commentary of the 20th century.

You should buy I’m New Here.  I’ve heard nothing to touch it so far this decade.  Further back in time, I’d go for Winter In America and Pieces Of A Man (which includes the better known version of The Revolution Will Not Be Televised), but really, everything he released is worth hearing.