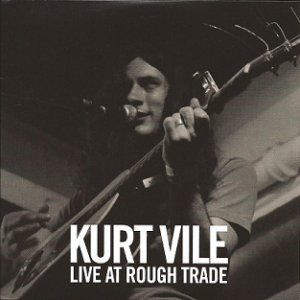 I’ve listened to a hell of a lot of guitar based music for a long time, and sometimes I think there’s just nothing new to be said. Often I hear new music, and it sounds just like stuff I was listening to 25 years ago – if I was a teenager it would be exciting, but I’m not and it isn’t. But then something comes along to remind me why I love the genre so much. Enter Kurt Vile.

I was a bit late to the party, Smoke Ring For My Halo was the first I bought, which is a bit embarrassing. The problem is that as I get older, I still like a lot of old stuff, but there’s new stuff arriving and there just isn’t time to engage with all of it. And John Peel’s dead of course.

Vile has great material, a really dirty guitar sound and a cool name – what’s not to like? Like any guitar music these days, there are sometimes obvious references, but he’s taking it somewhere new, so who cares.

This live EP was recorded in 2011, as the title suggests at the Rough Trade record shop in east London and was given away with the first few copies of Smoke Ring they sold.

What should you buy – well Smoke Ring is his best I reckon, but there’s a new album due out in a month or so: Wakin’ On A Pretty Daze which sounds interesting.