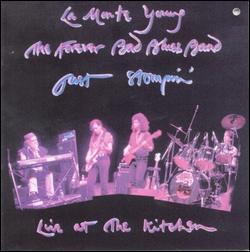 LaMonte Young is one of the most important musical figures of the 20th century, although he remains relatively unknown.  He’s considered the originator of minimalism (although I reckon Satie got there first) and as such his influence is writ large across much music that you probably are familiar with.  That’s most obvious with musicians like Philip Glass, or to a lesser extent Terry Riley who ploughed a somewhat similar furrow but with an eye on selling records.  His influence is probably most often felt in electronic music where minimalism has become mainstream, but also in the fringes of rock where the use of drones has become more widespread – Spiritualized being perhaps the most obvious to me, although Main, who I’ve posted here in the past are another example.

He was also very much involved with the experimental music scene in New York in the 1960s, working with John Cale (of the Velvets) and Yoko Ono.

Young’s defining work is the sprawling 5cd set, The Well Tuned Piano, a six hour solo piano piece whose evolution has consumed much of his life.  The “tuning” in the title refers to “just intonation” which is an alternative tuning he developed which frankly I don’t understand, but listening to it is much more manageable than you might expect.  I can syncronise most of the music systems in my house, and setting them all to play this while I potter about is a favourite activity on a rainy day.

This double CD was unexpected when it came out because it’s an extended (2 hour) blues jam – on the face of it a departure from the experimental minimialism he’s known for.  Young himself claims that all his music is blues based, and I can see a certain logic in that early blues can be quite minimal and it is where Young came from musically.  He plays a synthesiser here which has been tuned in the same way as the piano in The Well Tuned Piano, although that isn’t obvious to me.  This works because of the endlessly interesting interplay between Young and the guitarist John Catler – despite expectations this CD doesn’t drag at all.

Young is famously reluctant to make his music available.  What little he has released during his lifetime is all long deleted and commands truly insane prices.  I’m on his mailing list and got very irritated that he used to send regular emails pleading poverty and asking for money while refusing to make his back catalogue available.  My guess is that nothing will now appear until he dies, so if you want more, trawling the net for dodgy downloads is your only option.  I may post more here at some point.  If you’re ever in New York, it’s worth keeping an eye on his web site for his rare performances, but if there’s nothing on you can visit anyway to see/hear the Dreamhouse installation which I thought was worth the effort.