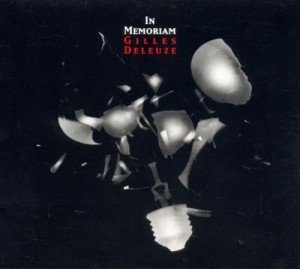 This is the best of three of compilation albums I have which were issued in tribute to the French philosopher Gilles Deleuze after his suicide in 1995. All of them are dark electronica, this one being issued by the Mille Plateaux label. I’m not entirely convinced that the link between Deleuze’s work and the music here really works for the listener, but since the label was named after one of Deleuze’s books, whether I can see the connection or not, it’s certainly there. The artists represented are very much from the intellectual end of electronica (and elsewhere). Scanner, aka Robin Rimbaud for example writes regularly for The Wire in which most of the artists figured prominently throughout the 1990s. To what extent they’re directly influenced by Deleuze isn’t clear,

That this was an important project for Mille Plateux is obvious.  There are no out-takes, poor quality remixes or tracks lifted out of context from albums.  Everything here is exclusive and hangs together remarkably well, despite the contrast between the full on aural assault of, say, Steel and the more ambient character of much of the rest.   Looking down the tracklist it’s a veritable who’s who of everyone who was worth listening to in the world of electronica in the 1990s.  If you’re into this kind of stuff, it’s essential listening.

This is a double CD, but the break between the discs is of no significance, so I’ve ripped it as though it was a single, very long disc.