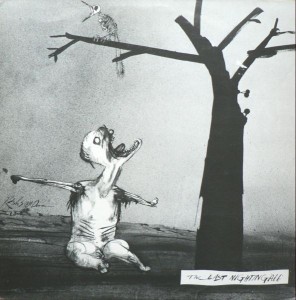 My mid teens were dominated by a scarcity of music.  I couldn’t afford to buy much and hadn’t discovered Peel, so my subscription to Birmingham Record Library was pretty important.  The trouble was they had a buying policy dominated by snobbery.  There were huge quantities of  dry classical music which didn’t appeal, some jazz which I mostly didn’t understand, vast quantities of what was called “Easy Listening” back then – the likes of Bert Kampfaert.  They thought that the people who liked pop music would damage the records, so there was precious little of that.  The diminutive Rock section though occasionally had some gems.  I hadn’t heard of most of it, so I used to borrow records based mainly on whether I thought the cover looked interesting.  It led to some pretty awful music, but also some discoveries which have stayed with me since.  One day I borrowed a Soft Machine retrospective, Triple Echo and was completely mesmerised by everything on which Robert Wyatt appeared, an obsession which has never left me.  There’s been none of it here so far because most of what he recorded is still available, but this is an exception.

Robert Wyatt has always been profoundly political so it was no surprise to see him on this benefit EP for the Miners’ Strike.  It’s short, but is an absolute gem.  The project was put together by Chris Cutler who wheeled in a bunch of mates, including Wyatt to perform the two jazz based tracks on side 1.  They’re beautiful songs sung wonderfully as alway by Wyatt.  Side 2 includes two spoken word pieces by poet Adrian Mitchell.  I don’t normally go for that sort of thing, but these two work well.  The first is a bit of a rant about how horrible school is, performed as a kind of spoken blues.  The second is a post apocalyptic tale.  Sandwiched between them is a remix of an old track from Henry Cow – a band Wyatt has worked with and who were consistently interesting.