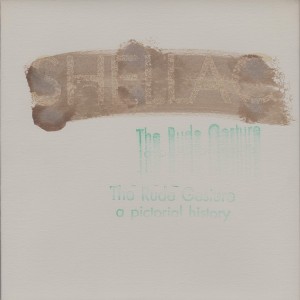 I don’t really go in for having favourites of anything musical, but Steve Albini is an exception.  His guitar playing is, by a big margin, my favourite, and slightly controversially I think it works better with Shellac than it did with Big Black.  Maybe that was because by then he didn’t have to worry about selling records because of his day job as producer/engineer to the stars.  Certainly I’m convinced that that’s the reason for the  consistent quality of Shellac’s releases – they only put something out when they’ve got something worth listening to.

Steve Albini’s also a vinyl nut, so it’s no coincidence that the band’s first releases were all vinyl only.  He bowed to the inevitable and made all the albums available on CD, but that never happened with the singles, all of which are deleted and never had a digital release of any sort.  If you’ve read some of my rants on here you’ll know that I’m not entirely convinced by the vinyl thing, but Mr Albini is one of the few people whose opinion on the subject I respect…  Certainly most of the vinyl I have bearing his name (which is quite a lot) sounds good.  So it is in a way a bit perverse digitising this material, but I don’t think it loses anything in the process.  Once it’s been through the vinyl reproduction system it has the vinyl sound whether or not you then digitally record it.

So this single, their debut, is as you’d expect a bit of a monster.  The guitar playing is of course amazing and instantly recognisable, but the rest of the band, especially the drummer, Todd Trainer are equally inventive.  It’s chaotic, loud, aggressive, utterly original and yet at the same time beautifully crafted.   They went on to become more experimental than this – these three tracks have something approaching conventional song structures, but they’re twisted out of shape in a way that the band has made its own.  The subject matter hasn’t moved on at all from Big Black – it’s mostly about really hateful men doing really hateful things.  Bleak stuff.  I tried to figure out which is the stand-out track, but every one is a contender.  I can’t make my mind up.

I have to mention the packaging.  It’s a hand assembled, cardboard wraparound sleeve, with the word Shellac printed with what I guess is invisible ink.  There’s a smear of what is supposed to be Shellac (but is actually root beer concentrate) which reveals the print underneath.  The title is stamped on.  My copy doesn’t look much like the image above – they’re all different, but I couldn’t be bothered to scan mine.  Sorry.

I’ll be posting all their other singles here at some point apart from the really rare stuff, none of which I have.  I found a rip of all that I don’t have years ago in reasonable quality called Extraneous Material which a bit of googling might still turn up.

Further listening?  Well their most recent album, Excellent Italian Greyhound is still available, and I think, their best.  Really though, you need all four.  All essential listening.  They occasionally tour – and I have to say that the gigs I’ve been to have been some of the best I’ve ever seen.