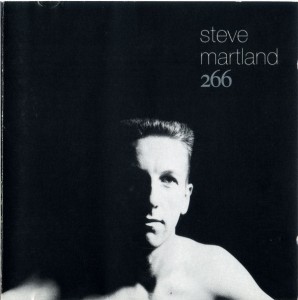 I noticed this morning that the composer Steve Martland died last week aged 53 of a heart attack which saddened me.  His first album is unavailable, so I thought I’d post it as a belated tribute.

It was released as part of a short lived Factory project to release classical music, aiming to appeal to a new audience.  I wanted to hate it, after all, what the hell did Tony Wilson know about classical music?  Fancy packaging and marketing with no substance I thought.  It turns out I was only partly wrong.  I don’t think Wilson did know much about classical music, and often the inane sleeve notes emphasised the point.  He even managed to spell Erik Satie wrong on the cover of one.  However, knowledgable or not, he certainly had an ear for it, and the series, which I eventually ended up buying most of for buttons second hand was consistently good.

I’m not sure Wilson really succeeded in bringing this music to a new audience – they didn’t sell well, but it kind of worked with me.  I was already receptive to this stuff, but not knowledgeable enough to know what to buy – this series gave me a reason to jump in.

The style of the release was new, at least for the genre, with Martland looking like a cross between a gay pinup (don’t know whether he actually was gay) and a guitarist from an Indie band.  It made a change from the usual dour looking classical releases, but whether it helped sell them I’m less sure.  It may well have put off more people than it attracted.

This CD isn’t a particularly easy listen, but it is worth the effort, especially Babi Yar, the piece he’s perhaps best known for.  It’s loud and discordant but has an energy which draws you in.  Although it’s played by an orchestra, to me it has more in common with the far reaches of jazz.  Whatever, it makes for a worthwhile listen, although it’s hopeless as background sound.  Listen to it properly or don’t bother.