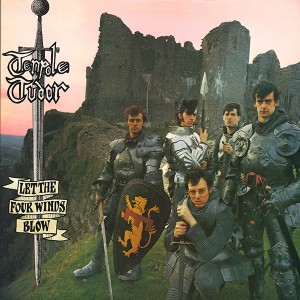 Another surprisingly inspired purchase from my pre-Peel school days, bought on the back of a very entertaining appearance by the band on Top Of The Pops.  The band defied being pigeonholed with this bizarrely eclectic album – punk, rockabilly, music hall, pop, rock etc etc.  They’re usually labelled punk, but that’s only because singer Eddie Tudor-Pole appeared in the Great Rock N Roll Swindle with the Pistols.  Full marks for the strange medieval thing going on, complete with ye olde brylcreme and sunglasses.

This album is really silly but it contains some great moments, especially the ludicrously catchy What You Doing In Bombay.  Play it loud and you’ll end up leaping around the room like Eddie did back in the day.

I bought this in Cyclops records in Brum which Brummies of a certain age will remember.  It was run by the most miserable bloke imaginable, and I have the rare distinction of never being thrown out of the shop like everyone else I knew was, although he maintained a continuous scowl all the time I was in there.  It was an odd shop in what was then a run-down Victorian arcade, but which is now very chi-chi.  It stocked all sorts of weird stuff which was otherwise completely unavailable, assumed deleted, and was cheaper than pretty much everywhere else in town.