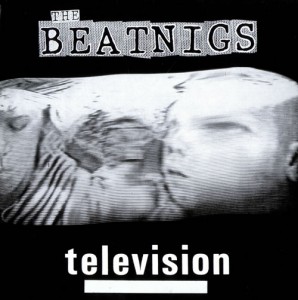 The Beatnigs were a short lived project led by Michael Franti who went on to form the Disposable Heroes Of Hiphoprisy.  They made only one album, from which this single was taken.  It’s an interesting mix of punk, hip-hop and industrial, and while it is very much of its time, it still works 25 years after the event.  The single version was reworked by Adrian Sherwood and the On-U crew.

I miss politics in music.  I remember during the Iraq war the intense irritation of Neil Young when he felt obliged to make an angry album about it because no-one else had.  OK, it wasn’t a great album, but the anger politics can inspire has made as much great music as it has bad.  This track deals with a theme that is as important now as it was then and is an old one in media studies.  Television it argues, fills so much of our lives with its banal garbage that it crowds out what’s important.  While the rich fleece us for every penny we’ve got, instead of doing something about it, we obsess over X Factor.  I don’t really watch TV, but I obsess over music and maybe that’s as bad.