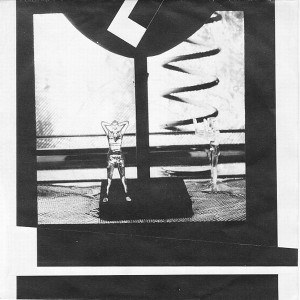 This 7″ single is of interest more for the label than the music.  It was the first release on AXIS records, who were sued soon after by another label also called Axis, so they changed their name to 4AD, and the rest as they say, is history.

It doesn’t have much in common with the musical powerhouse 4AD would later become, either in terms of the music or the artwork, excpet maybe the somewhat gothy feel of The Fast Set.  In fact it was a rather inauspicious start for 4AD – this is rather second rate synth pop by a band who released nothing else, apart from a surprising contribution to the first Some Bizarre LP (which I don’t have).  However I often like records as anchored to their time as this one is – primitive synthesisers probably do that better than any other instrument.  The B side (and their Some Bizarre contribution) is a weird Marc Bolan cover.

If you want more, and I realise that’s unlikely, you can download some demos here.