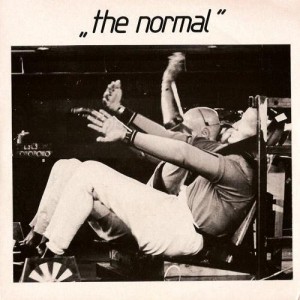 A few days ago, I posted the first ever 4AD release, and today it’s the start of another iconic label, Mute.  Unlike The Fast Set, this is not only a great single, it was really groundbreaking and its influence was huge.  The Normal is actually Daniel Miller, founder of Mute so it’s a surprise that this was his only release.   What it has in common with the Fast Set is primitive electronics and, as a result, a record very much of its time.

TVOD was actually the A side, but I’ve ripped it the other way around because it was Warm Leatherette which got the attention and airplay, and which appears on the front cover.  The song is based on JG Ballards novel Crash, since filmed by Cronenberg, which Miller wrote an unfinished screenplay for, and explains the Motor Industry Research Association cover of crash test dummies being, well, crashed.

The music is utterly minimal, repetitive, sinister and robotic.  It packs a punch now – what must it have sounded like in 1978?  I’m afraid I’m too young to have bought it back then…

According to Discogs, my copy is a first pressing, and it looks it.  It has a rough textured label and those serrations around the label so you could pile lots of singles on an autochanger.  Truly from another age.