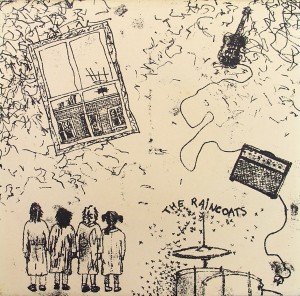 I so enjoyed revisiting UT yesterday that another contribution from a bunch of noisy women is in order.  It’s also because my internet has got so flaky lately that uploading an album is just too difficult.

I love records which ignore the rules, something women seem particularly good at doing.  I guess they’re outsiders in music and so feel less bound to its conventions.  The Raincoats were the original Riot Grrls, and this is their wonderfully shambolic debut 7″

It’s difficult to put into words why this record is so great.  It’s discordant, atonal even, and sounds like they’ve never heard any pop music in their lives.  Like UT they use a violin to good effect, which sounds a bit like John Cale in the Velvets.

It’s probably better known for its influence than the music.  Famously Kurt Cobain went on a pilgrimage to Rough Trade to replace his knackered copy of their first album – which led to them being re-issued, but more significantly they inspired other women to make mad music.  Palmolive, who plays on this single but left shortly afterwards went on to form The Slits, and they inspired the whole Riot Grrrl thing.  What for me is the most important part of this is that they ignored what was expected of them as women in music and just did their own thing.  That sort of stand is of course profoundly political, which works for me, but ultimately it works because , in the words of John Lydon, “The Raincoats offered a completely different way of doing things, as did X-Ray Spex and all the books about punk have failed to realise that these women were involved for no other reason than that they were good and original.”

I’m afraid my copy is pretty knackered.  I’m too young to have bought it at the time and picked it up a few years later at a jumble sale.  But don’t let that put you off – I think the crackle and distortion suit it very well.