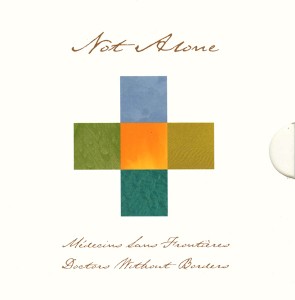 I’ve been listening to compilations a bit lately, mainly because I usually neglect them and forget the hidden gems they contain.  This one is a bit of a beast; five full CDs and 75 artists, so it is a bit overwhelming but there’s so much interesting stuff it’s essential if you’re into the offbeat.

It was put together by David Tibet (of Current 93) who obviously has a hell of an address book as a benefit for Medecins Sans Frontieres (Doctors Without Borders).  While it lacks the stylistic coherence of most of the compilations I’ve posted here in the past, the quality is mostly very high, and some effort has been made to make to album flow.  Realistically, you’ll never play the whole thing in one sitting, so the CDs are made to work pretty well as standalone albums.

It’s so vast and so varied I don’t really want to attempt a description – I’ll be typing all day.  I bought it for the Bonnie Prince Billy track, but soon realised it’s full of stuff I like, or at least stuff I would like if I’d heard it.  There are the avant garde names you’d expect, but also people representing his interest is the weirder end of folk, such as Bill Fay.

Really the best thing to do is look at the tracklisting below and to trust me that there’s very little filler.

Posting a charity album here might seem like a really bad idea, but it is sold out now.  If you enjoy it, you could assuage any guilty feelings you might have by donating to Medecins Sans Frontieres here.  They do really useful stuff providing medical help in places where it wouldn’t otherwise be available. 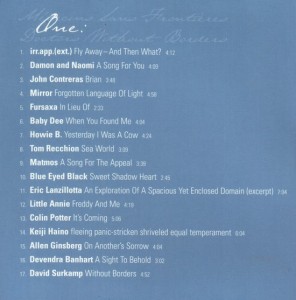 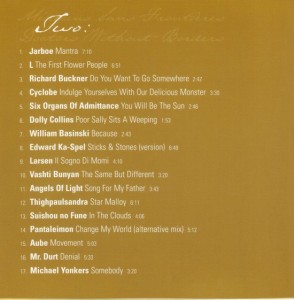 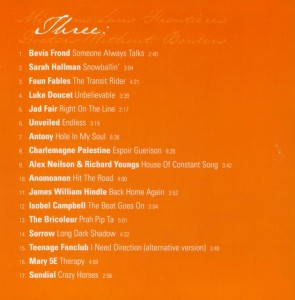 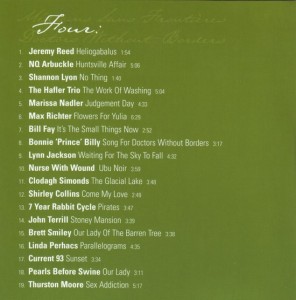 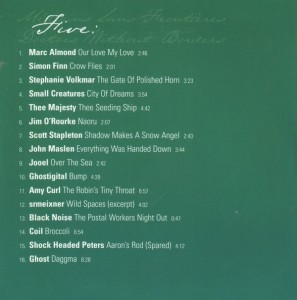 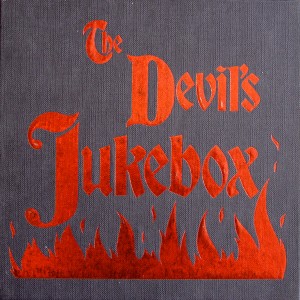 Ripping this boxed set of 10 7″ singles was a job for a rainy day, and since it rained yesterday, it got done at last.  It’s a compilation from the heyday of Paul Smith’s consistently excellent Blast First! label, containing mostly exclusive tracks from bands which are too important to ignore.  Detailed info is hard to come by, but there’s only one track here (by Sun Ra) which I know is definately available elsewhere.  To add to the confusion, this also came out on CD, cassette and LP as Nothing Short Of Total War with a different tracklisting on each format.

Sonic Youth are at their chaotic best, mixing the fairly conventional rock sound they perfected on Daydream Nation with the more experimental material they were better known for back then.  They also appear as their bizarre Ciccone Youth alter ego.  For me though, Steve Albini’s contributions; 2 tracks as Big Black and another as, well, I can’t bring myself to type it, are the highlight here.  There’s an electrifying version of Kerosene, a truly depressing track about small town nihilism and a surprisingly laid back take on He’s A Whore.  Dutch Courage by the unmentionable band is a shockingly badly recorded live version, but oddly, all the better for it.  Big Stick contribute a version of their classic Drag Racing, which frankly is the only thing they did really worth hearing. UT, the all women New York noise monsters are here with a re-recording of Evangelist, the stand-out from their In Gut’s House album which I’ll post another time.  Dinosaur Jr. are reliable as always, and there’s a suitably unhinged live version of a track from Locust Abortion Technician by the Butthole Surfers, slightly ruined by being way too long to fit on a 7″.

Blast First! was known as a noise label, and so this boxed set is predictably noisy.  There was more to Paul Smith than that though, and like Alan McGee over at Creation, he used the label as a platform for his own musical interests.  That side of him appears on disc 9, which has a rare 60s recording from Sun Ra paired with a Glenn Branca piece from his orchestra of electric guitars project.

As you might imagine, the box is a bit inconsistent in places, but overall the quality of the music is remarkably high.  The essential tracks more than make up for the filler; this was a compilation the label made a real effort with, and it shows.

More Sonic Youth cover versions today.  This is a split single; on the A side Sonic Youth cover a Mudhoney song, and on the B side, Mudhoney cover a Sonic Youth song, all done as a promotion for their UK tour that year.  Both bands were on great form and it shows on this really strong pairing.

This is a first pressing (with mauve cover) if anyone’s bothered about such things. 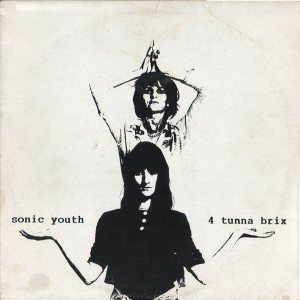 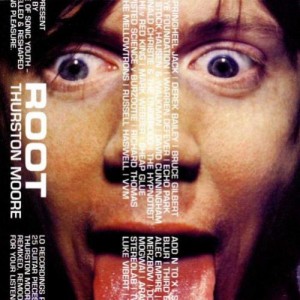 An interesting project from Sonic Youth guitarist, Thurston Moore.  He created 25 one minute improvised guitar pieces and sent them to 100 artists (in hoover bags).   They were instructed to remix them or create an accompanying artwork.  The outcomes of the project were this CD and an exhibition which included work from the likes of David Bowie and Gavin Turk.  Always a sucker for this sort of thing, I bought the limited edition version in a hoover bag.

A good idea isn’t enough though; this sort of thing sinks or swims on the quality of the results, and here the quality is consistently excellent, with some surprisingly big names (Blur for example) delivering some pretty off-the-wall remixes.  The rest is an impressive list of the credible end of independent music making in the late 90s; Moore’s address book is impeccable.

My favourite is the first track, remixed by the late, great guitar improv meistro Derek Bailey – a glorious cacophany of sound accompanied by a stylised technical description of harmonics.    I have no idea who “Cheap Glue” are, but their effort is really excellent, based on a looped voice sample of a guy describing getting attacked in a pub, which develops into a surprisingly funky track.  Add N to (X) and Stereolab are both predictable but in a good way.    Really though, the album is very consistent, providing you can tolerate the odd ear bleed moments from the likes of V/VM and Merzbow.

As for further listening, where do you start with Thurston Moore?  My favourite Sonic Youth albums are Evol and Sister, although you might prefer Daydream Nation if you’d rather listen to something more conventionally rock ‘n’ roll.   He has a new band, Chelsea Light Moving. If the free downloads are anything to go by, the new album should be interesting.