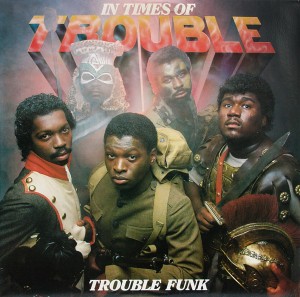 A while ago I posted my only Trouble Funk LP, and I so enjoyed listening to it again, that I’ve bought some more.

This was their second album, and it’s a bit of a monster.  It’s actually a double, half studio, half live.

The studio album is a little uneven; when they’re playing the funk they’re known for it’s fantastic, but there are a couple of slower tracks (especially Share Your Love) which are pretty dire.  They must have run out of material too, because the album closes with both a vocal and an instrumental version of the same track – it’s decent enough, but we really don’t need to hear it twice.

It’s the live album though which really makes this worthwhile and you soon forget about the shortcomings of the studio LP.  A stellar performance in their Washington DC home town, they never put a foot wrong for the whole 30 minutes or so.  Apparently this is their best album, and I’m not surprised; it’s easy to hear that they only came alive in front of an enthusiastic audience.  This is big band funk at its best – it’s such a shame the band were swept away by Hip-Hop.

The live album has no track listing on my copy (which is a German pressing).  The cover and labels just show part 1 and part 2 on sides one and two respectively, but the vinyl itself has two tracks on side 2 with a silent gap in between, so I’ve ripped it in three parts.  There are plenty of sources online for the tracklisting on this disc, all identical, but I’m not convinced they’re accurate (because Let’s Get Small  features on the disc but isn’t listed).  Here it is all the same:

Part 1 :
A groove
That’s what we’re
Talking about
Take it to the bridge
Grip it

Part 2 :
Double Trouble
4th gear
Give me a quick one
Sleep on it

The cover looks like something from one of those “worst of” lists the internet is full of.  These guys shouldn’t be allowed into barber’s shops unaccompanied.  The inner of the gatefold sleeve is also hilarious: 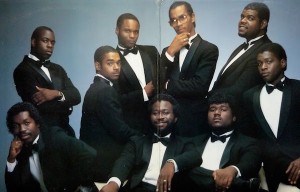 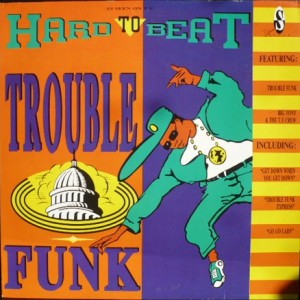 I mourn the decline of regional diversity in music.  It started as soon as recorded music became available and it became possible for lots of people to listen to the same thing.  Radio was another nail in the coffin, and now marketing muscle and cultural imperialism are pushing it ever further.  Diversity still exists though, and this album is a good example of it.

Trouble Funk were part of the Washington Go-Go scene which is a kind of heavy, big-band funk unique to the city.  It didn’t really make it across the pond; I heard them for the first time thanks to a really good track on one of those horrible free 7″ EPs music papers used to give away – obviously part of a failed attempt to market the band internationally.

Don’t be fooled by the cheap artwork on this album.  It may have been low budget, but the music isn’t.  If you have any interest in funk at all, you owe it to yourself to hear this stuff.  I’m told their earlier stuff, before a major label got hold of them is better, but there’s not much wrong with this.  There’s even a pastiche of Kraftwerk’s Trans Europe Express which works far better than it has any right to.

I suspect this album is a compilation, but there’s not much info out there about it.  Four of the tracks are credited to “Big Tony and the TF Crew”, which as far as I can tell is just Trouble Funk.

There seems to be nothing currently available by the band.  I’ve noticed on Discogs that their early vinyl isn’t worth much, so I may explore in more depth.  I’ll post anything I get hold of here at some point.

Update:  I enjoyed listening to this so much I decided to try to find more Trouble Funk.  I succeeded, so there will be more rips here at some point.  While doing a spot of research, I cam across Warr.org which has reviews of most of their output, and they have this to say about Hard To Beat :

“Released only in the UK, a compilation of hard-to-find material. Side One is credited to Big Tony & The T.F. Crew (“Go-Go Lady,” written and produced by Harvey Scales; an edit of “Back Doin’ What We Do Best”) though “Do The Whop” (also trimmed) was originally released as Go-Go Allstarz. Side Two is credited to Trouble Funk, though much of it is from the same Allstarz disc (“Graveyard Boogie / All Aboard”). Also in 1989, Fisher and Reed produced a single for T & A (Tara R. and Asia T.), “Definitely Dope” – it’s an enjoyable blend of go-go and hip hop, but good luck finding a copy (I heard it on MixCloud). (DBW)”