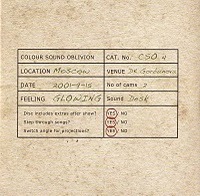 Still not able to do vinyl rips, so here’s something a little different.  This is the soundtrack from DVD 4 of the huge (and insanely expensive) Coil boxed set Colour, Sound, Oblivion recorded live in Moscow in 2001.

The boxed set was put together by the late Peter “Sleazy” Christopherson in the period after the death of John Balance, almost as if he knew his own end was not so far away.  It compiles on 16 DVDs all their live performances for which reasonable quality audio and video exist.

I’m rarely at a loss for words to describe music, but I’ve always struggled to explain why I like Coil so much.  Others have no such problem, but what they write is usually enough to put anyone off.  I guess it comes down to the emotional engagement which is at the heart of all great music, and while their recorded output is at times unlistenable, there’s always a rawness to it which is compelling.  Here though is a blog which deals with the problem of writing about Coil unusually well.

In life, Coil were never very good at making their music available, and in death it’s got a lot worse.  Their web operation, Threshold House still exists but these days there’s very little to buy.  Of note is The Remote Viewer which seems to be the only CD now available, and the download of Worship The Glitch.