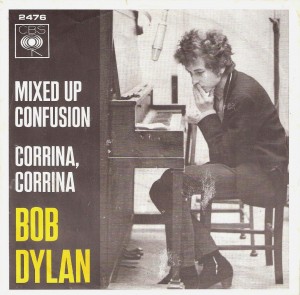 This post is a monument to how crap record companies can be.

The track itself is a bit of an oddity. It was Bob Dylan’s first single in 1962 and it bombed. It’s odd because it was years before he went electric, and yet it was recorded with an electric band.

However, it’s not actually the released version – it’s an alternate take.  So crap was Columbia that when they issued the restrospective Biograph in 1985 they used the wrong tape.  Fans spotted it immediately, but Columbia did nothing, repressing the CD many times.  Biograph got a make-over in 1997 and the incorrect take was replaced by something even weirder, a stereo remix of the originally released take which was only available in mono at the time.

The version here is slightly different again.  It’s from an Australia only compilation called Masterpieces which contains a number of other oddities I’ll probably deal with at some point.  The version of Mixed Up Confusion it contains is the same take as on the original Biograph but slightly longer.

If you want to hear the original mono version, it’s no good relying on Columbia.  It’s now been out of print for 51 years, so I doubt it will ever appear.  You could try to track down an original vinyl copy, but they’re insanely rare and you’ll need deep pockets.  Best option is to head over to Prof Stoned for his excellent vinyl rip of an original Dutch 45. It’s also where I got the artwork from.