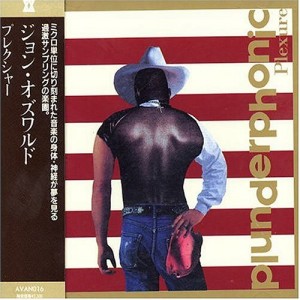 John Oswald was a pioneer of what we now call sampling, although the term he used was plunderphonics. His early work which dates back to the 70s involved complex manipulation of samples to create new music, which only really worked if the listener was familiar with the original. For example he created a Dolly Parton track where he slows her down so that she sounds like a man, then makes her duet with herself. It was all done laboriously with vinyl, a tape deck, a razor blade and sticky tape. Plunderphonic meant music created entirely out of material from other music.

This album, Plexure, released only in Japan in 1993 although getting sporadic distribution elsewhere, is rather different. None of the samples have been manipulated, but in the twenty minutes the album lasts there are around a thousand samples, many of which last only a fraction of a second. It was intended to be a “review” of music issued on CD – i.e. the first ten years of the format. As such most of the samples are by big names. The transformation happens because of the decontextualisation of the sounds used and their often comedic juxtapositions. The samples are so short that while much of it is recognisable, your brain simply can’t process what’s happening fast enough to make sense of it.

As you might imagine, Oswald’s music has had serious copyright problems and has mostly been unavailable. Most bizarrely when Elektra commissioned him to do an EP celebrating their artists, even that wasn’t released because Jim Morrison’s estate wouldn’t agree to it. Michael Jackson was particularly irritated by his deconstruction of Bad into a piece Oswald called Dab.

Plexure is usually considered his best work. The original Plunderphonic LP, which has been pretty much continuously unavailable since its release is now available free on his web site although it takes a bit of hunting to find. Weirdly while it’s illegal to sell the LP, it’s OK to give it away.  He’s reworked Plexure for a vinyl release, and there’s an exhaustive retrospective, 69-96 which is now deleted, so maybe I’ll post that here some time.

This is music everyone should hear at least once, but I can’t say I actually play it more than once every decade.