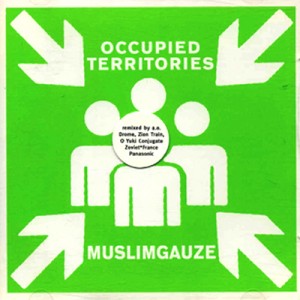 Muslimgauze, aka Bryn Jones who died in 1999 was an intriguing artist.   In life he released around 90 albums and countless singles, and since his death the number of releases has climbed to over 200.  Muslimgauze was focused primarily on the Israel/Palestine conflict, but also to a lesser extent other conflicts in the region, although Jones himself was not a Muslim and never visited the region.  He justified this by arguing that the moral issues involved had nothing to do with his own location, and that occupied regions shouldn’t be visited until they are free.  He likened it to opposing apartheid without visiting South Africa.

Most of his music is instrumental, and so the politics enter only through the titles, the art work, and sometimes samples of  news broadcasts.   With such a vast back catalogue, it’s difficult to generalise, but the stuff I have has a very middle eastern feel thanks to the samples and percussion he uses.  In all cases it sounds like no-one else.

This double CD from 1996 is unusual in that it is a remix project.  Usually Jones didn’t let anyone near his work, but here his source material is reworked by a variety of artists, mostly obscure people from the world of underground electronica, but a few who are better know, like Pan Sonic, Zion Train, People Like Us and :zoviet*france: .  Several of the tracks are remixed by Jones himself.  The two discs are quite different; the second, Occupied Frequencies is by far the best with it’s relatively ambient, freeform experimentation.  The first disc, Occupied Beats is as the title suggests more dance orientated, and rather generic as a result.  Standouts for me are all the Bryn Jones remixes and :zoviet*france:.

This is the original CD issue from 1996.  It was re-issued in 2004 but the material was the same and I doubt it was remastered.  I’ve left the rip as two separate discs because they are intended to be listened to that way.

It’s difficult to recommend specific Muslimgauze releases.  I’ve heard only a small fraction of them, and have tended to buy based on availability more than anything else because they’re always so limited and difficult to get hold of.  Right now, as has always been the case, almost all of his back catalogue is unavailable, and when re-issues appear, they usually sell out on pre-order.   What is available is distributed by Staalplaat.