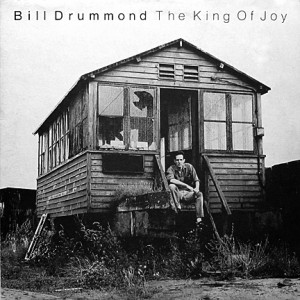 Hallelujah.  After a long wait my turntable is up and running again (new phono stage if you’re interested), so here’s the first vinyl rip.

Bill Drummond’s career has been endlessly interesting, right back to his stint as manager of The Teardrop Explodes and Echo And The Bunnymen.  Since then he’s best know for his commercial success with The KLF, as the guy who burnt a million quid, and more recently as artist and author.

Between the Manager phase and the KLF phase was a short lived period as a solo artist on Creation which yielded an album (The Man) and this single.  It is one of the most uplifting  records I own; I’ve spent far too much time this morning gyrating around the house to it.  While completely different in style to what he did next, the quality of these two tracks shows that the appeal of the records he made with Jimmy Cauty was grounded not in the pranks, but in the ability to write and produce great material.

The title track, King Of Joy is lifted from the album I’ve already mentioned.  Drummond himself says the song which is his “theme” is True To The Trail, a country style ditty from The Man, but for me King Of Joy does the job much better.  It’s a great song, and I’m a total sucker for pop songs with trumpet parts.  Never mind that ol’ Bill isn’t much of a singer – the overall effect is great and works all the better for his Scottish accent.

I Want That Girl is also on the album, but this is an instrumental version including a beautiful trumpet part by Henry Lowther.  It also has a Hammond solo too – could it get any better?

The B side is the spoken word The Manager, apparently the soundtrack to a film, although I’ve never seen it.  He’s ranting about the state of the music industry and what he’d do to fix it in his usual slightly unhinged but very entertaining way.  It works as a kind of statement of intent for what he was to become famous for.  You can hear True To The Trail playing in the background at the start.

Further listening?  Well there’s nothing available.  His Creation material is long deleted and the KLF and related stuff was all ceremonially deleted by Drummond and Cauty when they left the music industry.  He’s written quite a few books over the years, most of which are also out of print and very rare, but right now you can get 45 pretty easily which is a great read about his rather idiosyncratic take on the music industry.  It’s also worth keeping an eye on his web site.

The album is available (for a short time) here