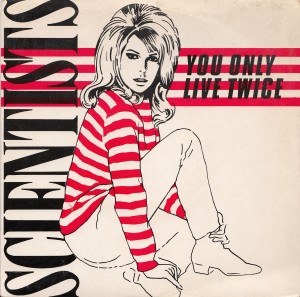 This is a request, but I can’t remember where from….

I don’t know much about The Scientists, other than their influence.  They were constantly being referred to by grunge outfits in the late 80s and early 90s – wikipedia specifically mentions Mudhoney but I remember there being others.  Curiosity roused, I bought this 7″ single (which it turns out is very rare) and the Blood Red River LP which I’ll get around to posting at some point.

This is a cover of the well known Nancy Sinatra Bond theme.  I’ve long grown tired of punk acts covering inappropriate songs; it was funny when I was 15, but not any more.  However this single really works – a cacophany of distorted guitars with Cramps style vocals which fits the song better than you’d expect.