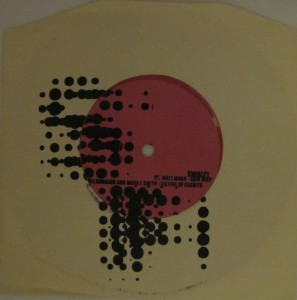 This is a rather mysterious 7″.  Mark E Smith is of course the man behind The Fall, so not mysterious at all, but that seems to be all that’s straightforward about this release.  Mild Man Jan appears on several V/VM albums, and is, I suspect, one of V/VM’s founder James Leyland Kirby’s aliases.  According to Wikipedia he lives in Stockport, so there’s a distinct possibility they know each other.

The music is downtempo electronica, not the assault on the eardrums Kirby usually produces.  Fistful Of Credits has, as expected MES on vocals, but the B side, Skin Deep which is credited to “My Mate Mark” isn’t, as you’d expect, MES again, but a woman who sounds very much like Martina Topley-Bird who sang on Tricky’s Black Steel, but it seems unlikely it really is her.

I can’t tell you much else.  It’s on pink vinyl and is really very good, but that’s about it.

Postscript:  Well, the knowledgeable people over at The Fall Online have filled me in on some of the background to this.  It turns out Mild Man Jan is a guy called Spencer Marsden, and that the A side of this single is available on the Fall compilation A Past Gone Mad.