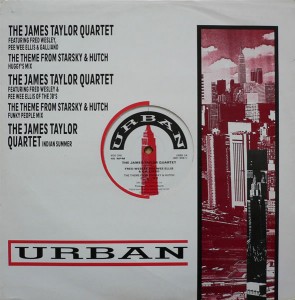 The James Taylor Quartet are a bit of a one trick pony, but what a trick it is – funked up Hammond driven jazz.  This single is their finest and turns the theme from Starsky & Hutch into something you wouldn’t think was possible, with the help of a fair chunk of James Brown’s brass section.

They’re fantastic live as you might imagine from listening to this, but it does start to get rather samey after a while.  I’ve seen them play twice, once in around 1987 just after their first single Blow Up had come out (at Sinatras in Birmingham if anyone remembers it?) and again last year.  A 24 year gap, but things had remained pretty static – superb funkiness for a while followed by me wishing they could diversify a bit.  In fact it was a carbon copy of a festival performance by Booker T Jones I saw last year, that other Hammond maestro  who suffers from exactly the same problem.  For both, the solution is the same: buy singles.

Play this loud and dance around the room.  It’s compulsory.