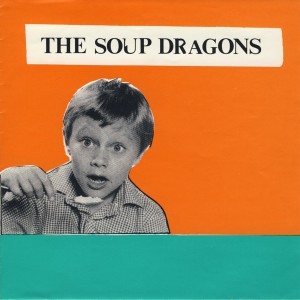 I sent for the Soup Dragons single….  Mail Order only….  £1.30 to Martin Whitehead but it never came.

The gods were smiling on me , because Martin Whitehead did send me the Soup Dragons single.  It now resides in a box of valuable records I don’t like very much, alongside the Fast Set.  People compare this to the Buzzcocks, but you’d have to have cloth ears to think there was any sort of similarity.  It’s the sort of trashy indiepop which gave the genre a bad name.  Dodgy material badly played…..

It’s always listed as “unreleased” but since you could buy it direct from Subway I guess undistributed is probably more accurate.  I seem to remember it had something to do with Subway going bankrupt, although this was only their second release,  the first, by The Shop Assistants did pretty well and they carried on for quite a while after this one.

I’ve also posted the bands first properly released single, which resides in another box of singles which I don’t like and which are worthless.  It’s better than the first EP though.

So why have I posted this stuff?  Mainly because it’s rare.  I know people want it.  Two posts in a row like this – I’ll try to get back to posting good music asap.