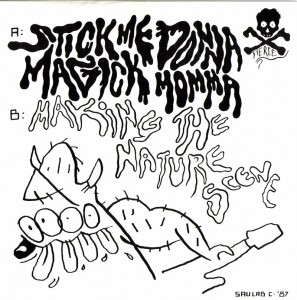 When this was released, Fierce implied that it was a bootleg and very much part of their identity as a subversive label.  However it later transpired that they had permission from Sonic Youth to to this, a pattern that was repeated with later releases.  It also continued their habit of releasing little music for a lot of money – this was originally 2 one sided 7″ singles, although my second pressing dispenses with that silly format.

The music here is interesting.  The A side, Stick Me Donna Magic Momma is a Peel session version of Expressway To Yr Skull which later appeared in a more polished version on Evol. It’s undermined by the format of this release – a 33rpm 7″ single which makes the sound quality a bit dodgy.  Given how expensive this single was, they could have sorted that out, but if you’re into early SY, it’s still worth hearing.

The B side is a re-issue of the insanely rare first single, (Over) Kill Yr Idols, and since it plays at 45rpm it sounds better than the A side.  Like the A side, it isn’t an easy listen, but it’s worth persevering with.