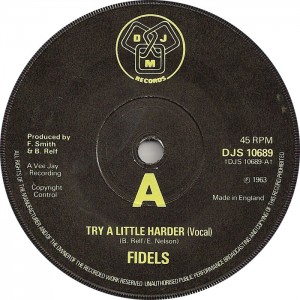 Not listed on Discogs.

This is one of the first records I ever bought.  I reckon I was about 7 at the time, and according to the cover it cost 15p.  I’d like to pretend that I was really into obscure northern soul at that age, but I actually bought this record because it was cheap and because I liked the idea of having an instrumental version on the b side.  Fortunately it’s a really good single – a slice of classic northern soul goodness.  There seems to be no information at all out there about the Fidels, other than an alternative spelling, The Fi-Dels, and they released only a handful of tracks.  They certainly know how to play, so I guess they were session musicians.  It would be nice if this was also valuable, but it seems the 15p I paid is probably about what it’s worth.  It does however crop up occasionally on northern soul compilations.