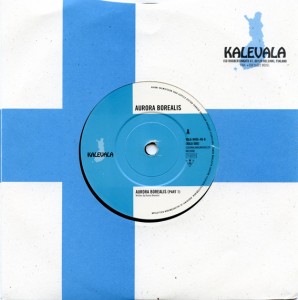 I posted a fake KLF single here, and this is another KLF related fake, this time, the band pretending to be someone else, rather than the other way around.

It was one of their more peculiar projects – a fake Finnish record label purporting to be tapping into a dynamic but hitherto unknown Finnish music scene.  What it actually is, is Bill (Drummond) and Mark (Manning) holed up in a studio in Helsinki with sundry locals making records by bands that didn’t exist.  That it was all a hoax was an open secret at the time, but it didn’t generate much interest and the project fizzled out after 6 singles, of which only 500 of each were pressed.  Rumour has it that Drummond still has most of them, which would account for the silly prices they now go for.   There was supposed to be an album of all the single tracks with a few extras, but only a handful of test pressings were ever done.  There was also an album of sorts recorded with a local singer, but again only a few test pressing materialised.  This is a rip of all 6 singles, bundled up together as an album.

Bill had a Scandinavian connection which seemed to be the driving force behind this.  They’d travelled to Sweden to try to persuade Abba to allow the Dancing Queen sample of their 1987 LP, and the book Bad Wisdom (by Drummond and Manning) was set there, inasmuch as it was set anywhere at all.

So what are they actually like?  Well in the main they’re rather fabulous, and of course bonkers.  It kicks off with Dracula’s Daughter which is a pretty successful fuzzy Velvets sounding track, then The Fuckers with a punk ditty about Roy Orbison.  Things go a bit wrong on the third single, by Gimpo, the KLF’s roadie and general fixer – side one is a pointless load of swearing and side two is Gimpo relating a rather grubby story.  Single 4 is by the Daytonas, a kind of surf-punk outfit which works well, the 5th (which suffers from playing at 33rpm) has bizarre covers of The Doors, Elvis and Bert Kamfaert in a kind of overblown Vegas style (probably my favourite).  It finishes with Aurora Borealis which is a pair of ambient tracks not too dissimilar from the KLF’s ambient works (which is a good thing).  I’m not so sure about Mark Manning, but this stuff works because Bill Drummond really understands music.  Yes, it’s a fake, none of these band exist and most of the sounds are made by session musicians, but that doesn’t really matter.  Drummond knows very well what a great surf-punk record should sound like, and can make it happen with a bunch of random Finns in a studio.    Importantly he’s also nuts enough to think that doing this is a good idea.

Probe Records have a rather odd page about Kalevala here.