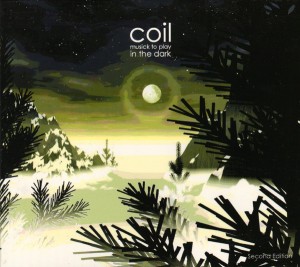 I’d intended to put much more Coil on this blog than I have. I love Coil and have most of their catalogue, but the problem is that I find them very difficult to write about.

Many people say this is their best album, and today, I’m inclined to agree, although tomorrow I’ll probably have a different view.  It’s not as industrial is much of their output – you could even describe it as pretty easy to listen to.  Stylistically, it’s very varied.  Sometimes it sounds like early Tangerine Dream, sometimes it’s much darker electronica, but always with an intense humanity.  This is dark, otherwordly music which is best listened to, as the title suggests, in the dark with headphones.   Is it one of the most important electronic albums of the 90s?  Well I think so, and it was certainly influential.  However typically for Coil it was pretty hard to come by at the time, and much more so now, so few have ever heard it.

My copy is a second edition, which has different (but still terrible) artwork.  The music however is the same.  I’ll post Volume 2, which is an essential comapnion to this another time.