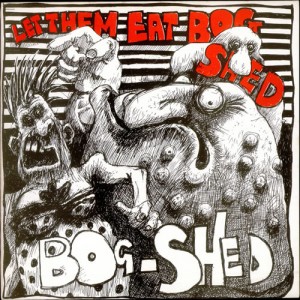 I bought this in the same way as I bought so much else.  Listened to John Peel and then went record shopping in my lunch hour.  Bogshed were huge Peel favourites, and according to Wikipedia he coined the term shambling to describe them.  Their angular, jagged sound, always seeming to be on the verge of collapse was similar to the sort of stuff usually to be found on the Ron Johnson label, but Bogshed stood apart from those bands with a sound of their own.

This EP was their debut, and I think their best, although like Mighty Mighty they reached a wider audience on the legendary C86 compilation.