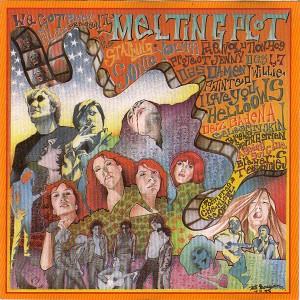 The cover of this album implies that it’s a film soundtrack, but as far as I can tell it wasn’t.  It’s just SST artists from the late 80s covering songs you’ll mostly be familiar with.  Apart from Sonic Youth the bands represented aren’t that well known, but SST had a house sound during this time, so if you like late 80s US punk, you’ll feel at home.

Inevitably some of it works, some of it doesn’t.  I reckon SOS is by far Abba’s best song but their voices grate so this was an open goal as far as I was concerned – but the version here is rather lacklustre.  Highlight for me is Tales Of Brave Ulysses – it betters the original in my view, and the cover of Hawkwind’s Master Of The Universe works well too.  There’s also a competent cover of the Beatles Wild Honey Pie which is worthy of mention for the guitar work.