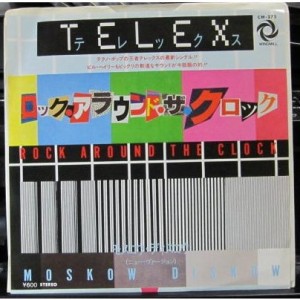 I stopped listening to chart music a long time ago.  I guess that’s partly because of my advancing years, but it’s also because records like this never make it these days.  It’s completely bonkers and the idea that someone at Sire thought it would sell is hilarious.  These days the dead hand of the marketing man has squeezed this sort of thing completely out of the mainstream.  I was 13 when this came out and bought it because I thought it was funny, and nearly 35 years down the line it still is.

The A side is a very deadpan electronic cover of Bill Haley’s awful Rock Around The Clock.  In fact it was more than just hilarious – it was groundbreaking too.  OK, Kraftwerk had been making electronic music for ages, but this was one of the earliest attempts at entirely electronic dance music.  Describing it as hilarious implies that it’s just a novelty record, but it’s actually very effective.

The B side, Moskow Diskow is much less of a novelty record, but really that’s only because it was written by Telex.  The style is very similar.  I played it to a friend who’s much more into clubbing than I am and it turns out it’s a bit of a classic.  I guess you can’t really get away with playing the A side in a club, but I can see that the B side would really work with the peculiar sound really old electronic records usually have.

The incompetent A&R guy at Sire had the last laugh with this one though – against the odds it charted.