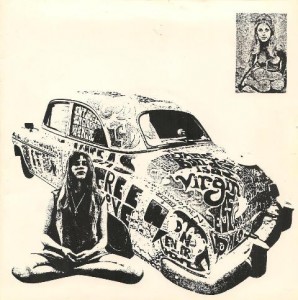 I haven’t posted anything from Fierce for a while, so here’s a rare thing – a single by a convicted mass murderer.  Fierce were all about annoying people, so what better way to kick things off than re-issue Charles Manson’s 1970 album, Lie: The Love And Terror Cult.  I don’t have that album, but this single is taken from it.  As is typical of Fierce, it’s one sided and very short.  The single actually has two tracks, but the second is silent, so I didn’t bother ripping that.

The music is pretty much what you’d expect from 1970 low budget hippy ramblings.   It’s not bad exactly, but no-one would be listening to it if it wasn’t Charles Manson.  But don’t let me underplay that.  It is genuinely unsettling listening to this when you know what he was getting up to.

So is this single in bad taste?  Probably, but many of us, me included find people like Manson horribly fascinating.  We read about these killers in the paper and watch TV documentaries about them in an effort to find out what makes such a monster as this tick.  I can’t see that listening to him sing is any different.  You can rest assured that not a penny (cent?) from this stuff ever made it back to Manson.