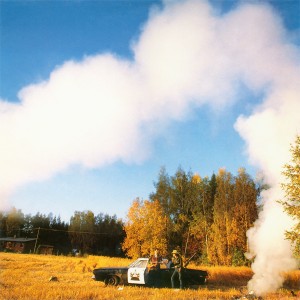 This is the follow up to the JAMS notorious debut, 1987, What The Fuck’s Going On.   That album was groundbreaking, brave, hilarious, conceptually amazing, illegal, but not that great.  The material was pretty weak, it was technically laughable and clearly thrown together.  This one though is an altogether different proposition.

On the face of it, it’s a good-time disco record.  It’s uplifting, you can dance to it, the samples work well (at least by the standards of the time) and the material is mostly really good.  Delve a little deeper though and there’s more to it.  The cover shows Bill Drummond and Jimmy Cauty with their American cop car in a field in Sweden burning the remaining copies of their debut LP.  That album was withdrawn at the insistence of Abba because it “sampled” (wholsale theft is a more accurate term than sampling) huge chunks of Dancing Queen.  They were ordered to track down all the unsold copies and destroy them.  What they actually did was track them down and then head over to Sweden to talk to Abba, artist to artist as they put it.  Of course no meeting took place, so the albums were burnt in a field.  At the time it seemed like another KLF stunt, but listen to this album (particularly the none-too-subtle track Burn The Bastards, but also Disaster Fund Collection) and it’s clear that they were really hurt by what Abba did and intended to have that meeting.  There’s also a potted history of the band on Prestwich Prophet’s Grin which of course namechecks The Fall’s Mark E Smith, the real Prestwich Prophet (1987 has a Fall sample which was the only one they got permission to use), and made the album sound as though it would be their last, which indeed it was.  Most subsequent releases were credited to The KLF, and apart from a single or two, the JAMS name was abandoned.

The technical development here is remarkable.  1987 was amateurish in the extreme, to the extent that it’s barely listenable now, but this, appearing very hurredly soon after, is well constructed, especially when you consider how new the techniques they were using were back then.  It was well reviewed and set the scene for the huge stars they were about to become.  It’s strange that this, of all their albums, is most overlooked.

I may or may not post the 1987 album.  It’s so widely available online that I imagine that everyone who’s interested has heard it.  Let me know if you want it. 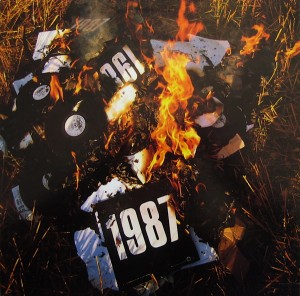