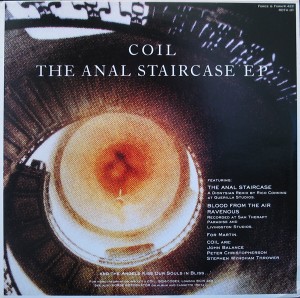 I’ve spent a fair chunk of the last 25 years listening to Coil, but there’s not much of it here because it’s mostly on CD.  This early EP, a kind of prequel to their second album Horse Rotorvator is an exception.

All Coil’s music has a dark, menacing, mystical quality to it, regardless of the different styles they’ve adopted over the years.  The sound on this EP fits that description and is solidly industrial in style.  It was groundbreaking back in 1984, but such was Coil’s influence, that it has a certain familiarity now.  Even though others followed Coil down this path, theirs was a singular vision which their imitators never managed to emulate.

There’s very little Coil material currently available, partly because they were never that good at that side of things, and because the mainstays of the band, John Balance and Peter Christopherson are both dead.  Have a look at my other Coil posts for links to what is still for sale.