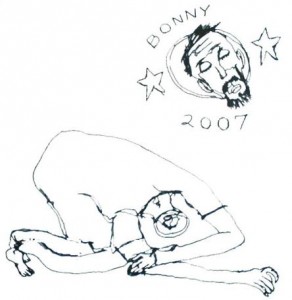 This is a very rare BPB single, available only at gigs during 2007.

The A side is a curious thing – the writing credits are shared between EC Ball and John Martyn, contributing part one and part two respectively.   Hopefully you already know who John Martyn was (if you don’t, check him out), but EC Ball was a rather obscure American gospel/folk singer who died back in 1978.  Both recorded songs called John  The Baptist, Martyn on his 1970 album Stormbringer! and Ball in 1973 .  The only thing the songs have in common is the titles, and BPB simply performs them back to back.

I prefer the B side, which is a impassioned but slightly unhinged live version of Strange Form Of Life which originally appeared on The Letting Go.  The song is a favourite of mine, and this, I think, is the best version.