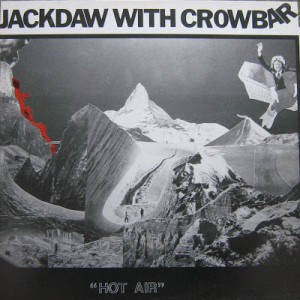 This is a refreshingly oddball record from a refreshingly oddball label.  Ron Johnson had a house sound, which was very angular, Beefheart-like guitars, and yes, I know that comparisons to Beefheart are stupid because the whole point about his stuff was that it sounded like no-one else.  It’s easy to mock indiepop, and I’m not immune to doing it myself (especially with Subway), but the Ron Johnson sound was something new, and for me at the time, quite challenging.

Jackdaw With Crowbar had, at least sometimes, the RJ sound, but there was much more to them, and this album than that.  This album has, to my amazement at the time, a few reggae tracks, some of which venture quite a long way into dub territory, and do the job pretty well.  There’s a bit of pseudo experimental noodling (especially on the first track), but when they’re not doing that or the dub thing, it’s some of the most innovative guitar music from that time.  I probably prefer Big Flame, but JWC are still a class act.

What you don’t get from this album is their multimedia work.  Back in the late 80s they used to gig with projections of 8mm films they’d made, and some of their work cropped up at a film festival I’m a regular at (Flatpack if you’re interested).  Recently, after a long hiatus, they’ve reformed and are doing an updated version of their multimedia extravaganzas, which unfortunately I’ve only just noticed.  Keep an eye on their Facebook page for more.