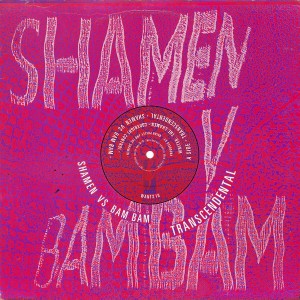 I’ve just spent a relaxing hour listening to Working Week’s debut album, and was going to post it here, but it’s just been re-issued, so you’ll just have to buy it yourselves.  Instead here’s a 12″ I’ve always been rather fond of.

The Shamen earned their place in music history by their performance of Ebeneezer Goode on Top Of The Pops.  As a record it was just annoying, but I remember howling with laughter when I saw them bellowing “E’s Are Good” on prime time family TV and getting away with it.  However there’s much more to the Shamen than annoying records and BBC censor baiting; their earlier material is musically and lyrically really interesting.  The original version of this track appeared on what I think is their best album, In Gorbachev We Trust, but this version has been revamped for dancefloor duties by Bam Bam.  It contains all the usual unsubtle drug references, which are particularly appropriate on an acid house track.  OK, it’s rather dated, but it has a great synth riff and is still groovy enough to inspire a bit of dad dancing around my man cave.

There will be more Shamen material later, when I’ve checked out how much of it is now unavailable.