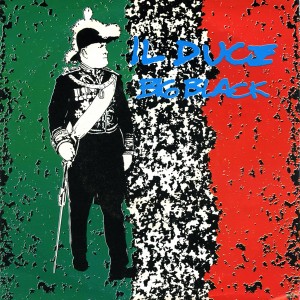 More from the mighty Steve Albini – a slightly perplexing homage to Benito Mussolini which I assume is tongue-in-cheek.

I’ve always thought this was an odd choice for a single.  It’s better than most bands manage in a career, but it doesn’t really stand out against the other stuff they did that year.

The B side is from the Atomizer LP which I think is their best.  It sounds like the same version to me, but haven’t bothered to check.

I never quite came to terms with the drum machine Big Black use.  Of course it was a big part of the revered Big Black sound, but really I prefer Shellac with their human drummer.  Criticising Big Black for that is unfair though – they produced some of the best guitar based music of the 80s which I played to death.

Apparently Steve Albini had one of his customary hissy fits when Homestead issued this as a 12″ against his wishes.  They left the label as a result.  This however is the common as muck 7″.

I may add to this tomorrow – been to the pub and am struggling to string anything meaningful together.