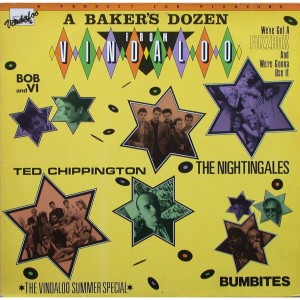 This is a sampler for Vindaloo, the Brum label run by Robert Lloyd.  It’s best known for discovering We’ve Got A Fuzzbox And We’re Gonna Use It, represented here several times.  In their early days they were probably the most incompetent band I’ve ever seen, but they were charming, fun, and wrote some decent material.  I also thought they did a good job during their chart phase, although that was never really my thing.

However, for me Vindaloo’s main achievement was Ted Chippington, the otherworldly non-comedian I first saw supporting The Fall.  You may well hate him – most do, but his belligerant refusal to obey even the most basic rules of comedy made him utterly unique as a performer.  There’s none of his stand-up here, just some musical “numbers”, which are hilarious if you get it; the worst karaoke you’ve ever heard if not.  She Loves You got some daytime radio play (Steve Wright liked it as I recall) and was a minor hit.  Yes, it’s a joke, but I think he performs it with real pathos.

Normally I like the Nightingales, but here they were in a weird Country and Western phase which I thought was terrible.