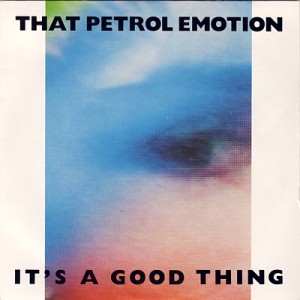 That Petrol Emotion had a great line in uplifting guitar based rock and this single is one of their best.   They emerged from the ashes of The Undertones, and my sacreligious opinion is that they were better.  There’s also a political edge as there ought to be from any Irish music from the 80s – the sleeve has a rant about inhuman strip-searches carried out by the British in those days.

The band were however pretty patchy – B sides were never a strong point, but with an A side this good, who cares.  It probably means it’s not worth shelling out for the 12″.

If anyone has a lossless rip of their album Manic Pop Thrill, preferably from the CD I’d be very grateful.  All I had was a cassette made by a friend which went to meet its maker long ago.