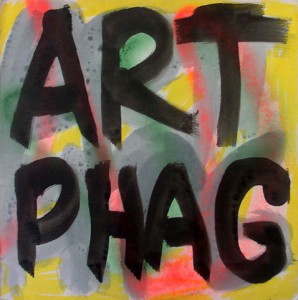 Art Phag were a kind of deranged Cramps type band from, I think Detroit.  They have a fabulously dirty, primitive sound and a great line in surreal lyrics.  They had a bit of airplay with the first track Golf, which is a somewhat suspect tale of a guy beating his girlfriend up because she touched his golf clubs.  It’s tongue-in-cheek, but still dodgy.  Fortunately the rest of the album is much better, in fact a forgotten classic of what I suppose you could call lo-fi horror swamp rock.

The cover is worth a mention – an old cover turned inside out and hand painted.  Mine doesn’t look much like the image above, but I don’t have a scanner big enough to do album covers.

They did a few more albums, none of which I’ve heard (although they’re apparently not that great) before imploding in a tide of psychological disorders – a bit like the Elevators by the sound of things.