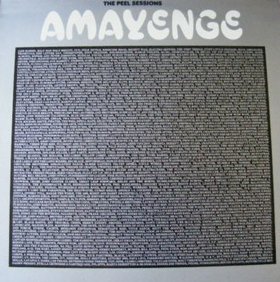 I’ve just heard that Nelson Mandela has died and I’m quite upset.  At his age it’s no surprise of course, but I suppose it has made me think of the contrast between him and the appalling self-serving corrupt politicians all countries have to put up with these days.  It’s telling I think that those politicians have done the bidding of their paymasters and allowed the WTO to pass rules which would make the sanctions which brought down the apartheid regime in South Africa and swept Mandela out of prison and into power illegal today.  Trade is more important than justice it seems, and I see no worthy successors to Mandela, either in South Africa, or anywhere else for that matter.

Back in the 80s when Mandela was still incarcerated, there was a lot of music being made in support of him.  This is one of the lesser known ones, which I’ve ripped as a rather inadequate tribute to Mandela.  Amayenge are big stars back home in Zambia with a very distinctive sound which is unique to that country.  Peel of course picked up on them, but they never really broke through in the UK as other African bands he championed did.  My view is that the Zimbabwean sound was much more compatible with western sensibilities, while Amayenge were altogether too traditional.  Still this is a fine EP, posted for the third track, Free Nelson Mandela which is not the same song as the one you’re probably familiar with.