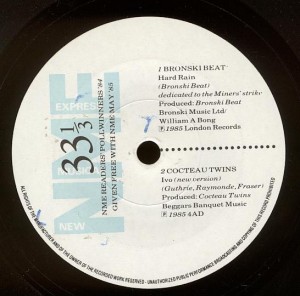 Back in the 80s, British music papers sometimes gave away 7″ singles.  They often included exclusive tracks by interesting artists and at a time when music was expensive to buy and I was broke, I was pleased to have them.  The downside was that they always played at 33, had way too much music crammed onto them and so sounded terrible.  However, for dull technical reasons, my vinyl rig is particularly good at extracting what little sound quality there is on these discs, so I’ve been ripping some of them over the last few days.

This one is of particular interest because it includes an exclusive Smiths track from a show they did in Oxford.  Most of that gig has appeared in various places in decent sound quality, but this track only ever appeared on this single.  The whole gig is crying out to be issued as an official live album, but there’s no sign of that happening, so right now, this is as good as you’ll get.  There’s also a nice Cocteau Twins track – a re-recording of Ivo, a Bronski Beat track which I rather like, and finally U2 which is not my thing at all.

The sound quality isn’t great and it crackles a bit, but it’s listenable and worth it for the rarity of the material on it. 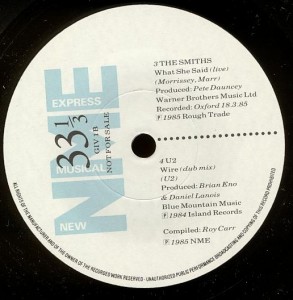