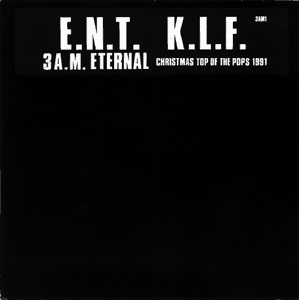 I’m endlessly amused by KLF pranks, well the ones that worked anyway.  This was an especially good one – performing their stadium house anthem on that most family orientated of music shows, Christmas TOTP with thrash metal band Extreme Noise Terror.  Music is way too dominated by the marketing men, so it’s really refreshing to see something as stupid as this kick down the doors into the mainstream.  At the end of the performance, Bill Drummond fired a machine gun into the audience, and it was announced that the KLF had left the music business.  They duly split and deleted their lucrative back catalogue, and apart from a handful of fairly low key projects have been true to their word.

As a record I quite like it.  Yes, it is a joke but it works better than you might think, not that it inspired me to buy any more ENT stuff.