This is another magazine freebie 7″, but since this one (despite what it says on the label) plays at 45 and doesn’t have too much music crammed onto it, it sounds OK.

The music is great too.  There’s an exuberant run-through of Guest Informant by The Fall recorded live in Vienna (Get the original on The Frenz Experiment which has recently been re-issued as part of a very good value 5 CD box).  There’s an insane amount of Fall live material available now, most of which isn’t worth hearing, but this is an exception; it’s sharp and well recorded.  Then there’s the excellent Shamen track, Christopher Mayhew Says which is the true story of a plummy sounding MP taking LSD as an experiment, complete with hilarious samples of the man himself.  I don’t have the regular release of this, so I don’t know whether this version is different.  I know nothing about Silver Chapter, but this is a great organ driven Rock N Roll track – perhaps I should have taken more of an interest in them. 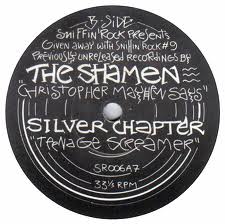