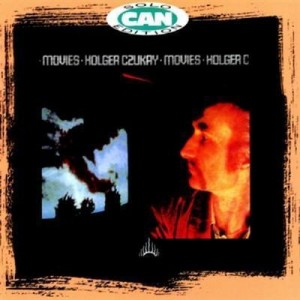 Another album I’m surprised to be posting – this really should be available.

Holger Czukay was Can’s bassist, and this was his first solo album.  I was sent it by The Wire magazine for getting a letter published, which created a bit of an odd relationship with it.  At first listen it sounded too kitsch for my taste – the opening track, Cool In The Pool just seemed silly.  I gave it less of a chance because I’d never decided to buy it, although anything connected to Can is always worth a go at Vinyl301 towers.  As time went on I started to get it.   It’s based very heavily on sampling, but back then there were no samplers, so like John Oswald, he had to splice bits of tape in a very laborious process.  The samples come from bits of film, short wave radio broadcasts and TV, overlaid with manipulated guitars and vocals, but unlike the assault on the eardrums John Oswald produces, this is funky.

The highlight for me is the third track, Persian Love which takes a Persian song recorded on short wave radio which it manipulates and overlays with more guitar work.  This sort of trackis commonplace now, but back then it was totally new, so Czukay isn’t following the rules.  There’s no thumping dance beat plonked clumsily on top – he’s made a new band incorporating the unknown singer which makes for a slightly unsettling listening experience.  It sounds like a coherent musical unit, and yet the vocals are obviously coming from another place entirely.  Genius.

More listening: well if you’re not familiar with Can, it’s time you were.  Tago Mago and Ege Bamyasi are good places to start.