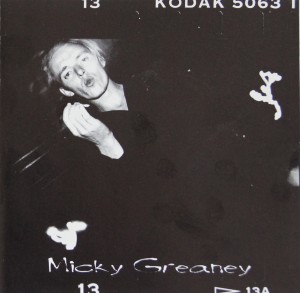 Not listed on Discogs

I kicked this blog off back in February with Micky Greaney’s unreleased second album.  “Michael” was keen to hear his debut, so here it is.

I wrote quite a lot about Mickey back in February, so I won’t repeat the tragic story of his musical career here, but I will update it.  Micky’s low key return to music making is continuing, with infrequent gigs at small venues.  However his rather glamorous band is no more – I don’t know what the story is, but I guess they grew tired of a lack of progress and a lack of money.  He’s now playing with a young keyboard player, and a cellist who, bizarrely I used to work with.  It’s actually an improvement – with Mickey the less backing he has, the more effective his material, so while I prefer him solo with an acoustic guitar, this new band is an improvement I think.  He’s still making promises about an album in the pipeline, but I’ll believe that when it happens.

This album is the closest he’s ever come to releasing anything properly.  It’s a commercially produced silver CD with proper artwork, but he had no record contract and self released it.  I don’t know why it happened that way – back in ’94 there was quite a buzz around Micky and it’s surprising a label didn’t pick this up.  It doesn’t sound like a self- released album; it’s actually pretty slick, thanks I guess to producer Bob Lamb (not as big a name as John Leckie who produced Micky’s second album, but a name none-the-less).  Lamb’s involvement, and the money which was obviously spent on this album makes the self release even stranger.  Maybe the idea was that a low key release would be picked up by a major as happened to The Lilac Time (also with a Bob Lamb production).

I absolutely love this album, and it’s purely down to the songwriting and Micky’s delivery.  For me the production only distracts from that and I’d sooner it was recorded as a demo, but really, I’m happy just to be able to listen to it at all.

I bought my copy of this CD, which is now impossible to find, from Micky after a gig.  It has no artwork, so thanks to Andrew for sending me a scan of his.  I really wish Micky was making money from this himself, but there’s no sign of that.  Hopefully hearing this might persuade a few people to go to one of his gigs (rarely outside Birmingham though I’m afraid). 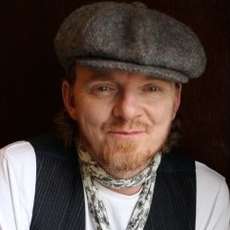 Well this is an odd one to start with.  Firstly it’s not even a vinyl rip because my phono stage is making an annoying humming noise, so until it’s fixed, I’ll have to stick to CDs.  Secondly, this album has never been released, and it has no artwork or even track titles.  So why bother?

Micky is one of music’s great underachievers.  He’s been called Birmingham’s greatest ever songwriter.  In the 90s he had residencies at Ronnie Scott’s in Birmingham and London.  He recorded an album with John Leckie at Abbey Road.   Despite this he’s released nothing at all, at least not officially, and rarely performs.  Plagued by health problems, a lack of confidence, maybe alcoholism and a general lack of organisation, things never really got moving for Micky, and after the Leckie recording, he disappeared completely for many years.

Various figures on the local music scene have tried to take him under their wing and kick start some sort of comeback, believing that if only someone took care of everything so that all Micky had to do was turn up and sing, all would be well.  All attempts failed after a few low key gigs and Micky fell back into obscurity.

I’ve seen him live quite a few times.  Mostly just Micky and an acoustic guitar, as often as not in a tiny cafe in a garden centre, always with a small, but enthusiastic audience.  His material is mostly superb, and his delivery absolutely gut wrenching.  His intensity puts me in mind of Bonnie “Prince” Billy, although his style is completely different.  Given half a chance Micky goes for big jazz influenced arrangements, but really he’s at his best alone with an acoustic guitar.  All the extras tend to drown out much of what makes him worth listening to in the first place.

His debut album, “Little Symphonies For The Kids” was self released, and as far as I can tell was never available other than from Micky himself.  I bought my copy from Micky after a gig.  I may post that at some point in the future since it’s no longer available.

The Leckie album was recorded in 1996 but never saw the light of day for reasons that were never really clear, although it was at about that time that Micky’s health took a dive and he disappeared from the scene.

A couple of years ago he recorded a particularly intense acoustic gigs, promising to release it as a live album.  True to form though it never materialised.

He’s currently in the midst of his latest comeback, which is rather more organised than anything I’ve seen before.  He has a band, great new material, and is gigging, albeit very rarely. The band is great and it’s easy to see why Micky enjoys playing that way, but I much prefer him solo. He’s even shot a video of some of the new material, but still nothing has appeared officially and the gigs are as rare as ever.

At the start of this particular comeback, at a free gig in the bar of Birmingham’s Symphony Hall, something astonishing happened. Mickey was selling CDRs of the legendary John Leckie album. I’d long since given up hope of ever hearing it, but here it was, and in two versions no less: normal and extended. Both were just folded up in a sheet of A4 paper with no tracklisting or artwork. After that there were no more CDs for sale, at least not at any of the gigs I went to.

So here it is, the long lost Leckie album in its extended form. It’s overproduced of course and as a result a bit blanded out, but Mickey’s superb material and delivery are there. If anyone has a tracklisting for this, please get in touch.

At this point I’d like to direct you somewhere to buy Micky’s music, but since there’s none available, all you can do is watch out for gigs (rarely outside Birmingham though) and do a search on youtube