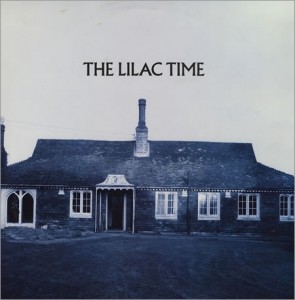 I’ve posted this because of this post on one of my favourite music blogs. That post has the remixed, polished version of this album released by Fontana, whereas what we have here is the original release on Swordfish (2 blokes with a record shop in Brum). It’s less polished than the Fontana version, and in my view all the better for it.

The creative force behind The Lilac Time is Stephen Duffy, whose career is nothing if not improbable. He was a founder member of Duran Duran, but left before their major label deal and subsequent fame. He had a commercially fairly successful phase as Tintin, which I best remember for the song Kiss. I remember the buzz that created – friends who were really not much into music were persuaded to part with vast sums of money for the first and last time in their lives for this single which was initially only available on import. What the fuss was about escaped me. He also co-wrote and produced Robbie Williams’ most successful album, Intensive Care. However most of his recorded output has been with his own band The Lilac Time, which despite periods of inactivity is still around 26 years after the release of this album.

The album itself is mostly whimsical, folkish songs with more than a passing resemblance to Nick Drake. It’s a little bland for my taste, but saved by the strength of the songwriting. It clearly sold poorly in this format – apparently only 1000 Cds were pressed and before long Swordfish were more-or-less giving them away, which is how I came to acquire my copy. Maybe in 1987 the Duran Duran connection stopped Indie kids parting with their cash.

I can’t really recommend any further listening because this is the only Lilac Time I have, but according to their web site they have a new album out shortly. This album is currently available in its remixed Fontana version with an extra disc of radio sessions and the like.